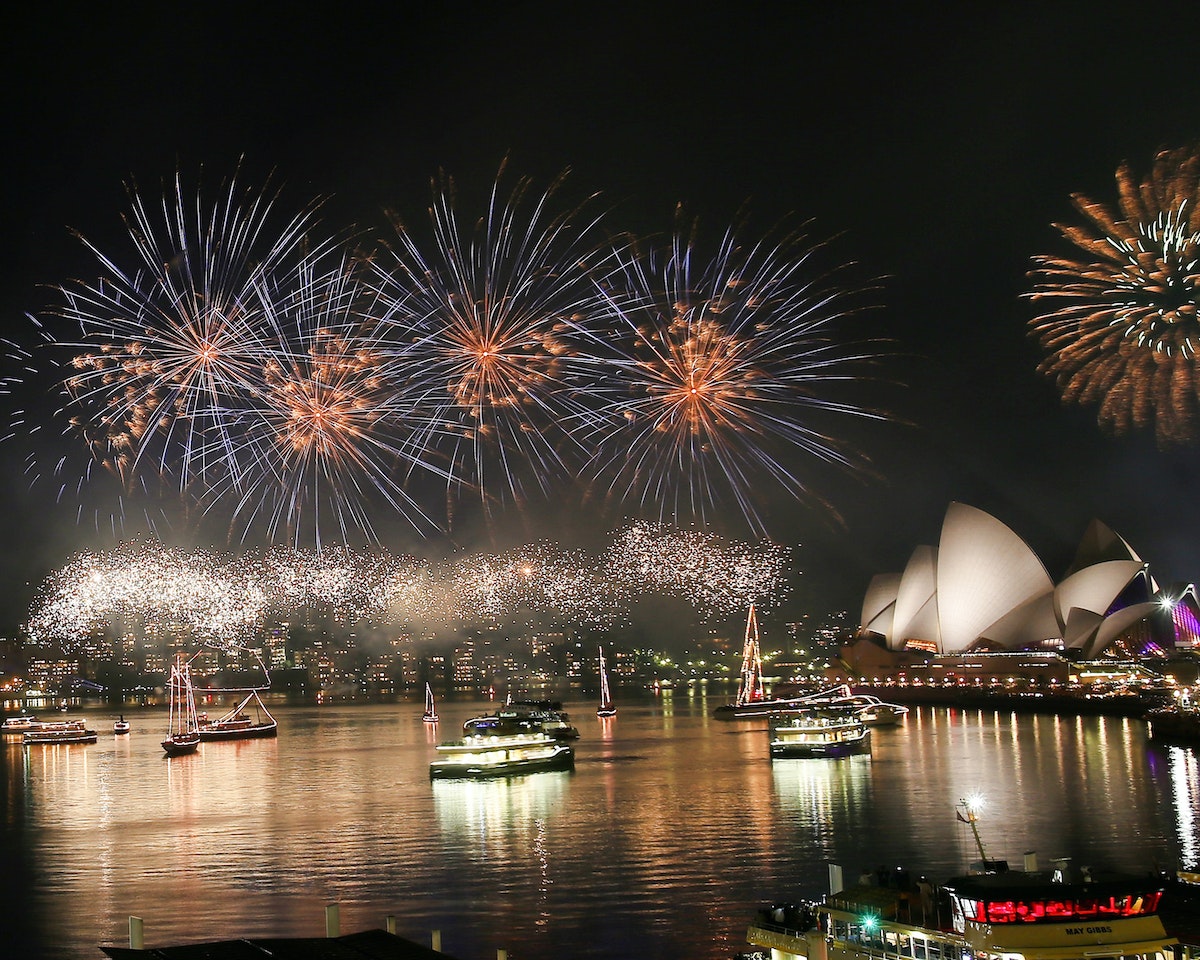 Why is it a Little Dissatisfying?

Looking for something engaging, different and constructive to do in or around central Sydney on New Year's Eve? Good luck, because the Sydney Harbour Fireworks completely dominates the city, and there is little space—physically or emotionally—to do anything else.

A landslide of lemmings

And should you try, you are likely to be subsumed by lemming-like hoards criss-crossing the city—all bent on getting somewhere else. It's amazing that a million people are so eager to voluntarily commit themselves to be confined in crowded, cordoned-off compounds, so kindly provided by the invisible hand of unseen authorities. And more so, that so many seem bent on experiencing the same thing, the same way, at the same time… of pretty much the same offering, as the year before.

And while the phenomenon point to a communal need for mass connection, its nature leaves some feeling less than fulfilled—no matter how spectacular the event.

The fireworks on Sydney Harbour are definitely dazzling and predictably pretty. But it is essentially a passively “consumed” event, with a suspicious whiff of “bread and circuses”…

The City of Sydney spends an absolute bomb to get the biggest bang out of its fireworks buck. Each year it competes with itself to exceed its previous expectations.

But does the Mayor give away one of the City’s main motivators when she announced after the last event that the spectacular achieved two billion viewers world-wide…???

This is an impressive metric (dare I say KPI) which says a lot about its reach. No doubt the majority of these viewers were captured through quick grabs on the tv news (stacked up due to a favourable time zone), and quick flicks on instantly-disposable social media. But the metric says nothing about any qualitative engagements that might extend beyond the fleeting.

If the solemn announcement of the metric suggests an imperative to promote a bureaucratically-led branded Sydney, there will inevitably be a tension between marketing requirements and a truly authentic experience for those on the ground.

Another harbour-focused Festival in Sydney is the Vivid lights festival, which presents as a barely concealed marketing drive for a "Brand Sydney".

Vivid was originally developed by the State’s tourism/events bureaucracy to warm up cold hotel beds in the dead of winter. The Festival provides hundreds of thousands of visitors with any number of events that can only be passively consumed. It comes off feeling like too much television.

Of course, in terms of its own self-fulfilling KPIs, the event is enormously successful. However, as an engaging event, it will always have problems in achieving authenticity and engendering any sense of personal ownership.

It seems that arts and events bureaucracies, can only ever deliver branding exercises as one-way experiences of spectacular disposability. And this must be the inevitable way for any top-down, mass event. Exercises in branding, will always leave some feeling underwhelmed and vaguely dissatisfied; and if conscious to the process, mildly manipulated.

But opinions are easy. Is there another model for the effective delivery of an event that truely seeks to engage? In societies with deeper roots, bottom-up, mass-participatory events are much more prevalent.

Due to the limited settled histories and traditions of our modern nation, bottom-up mass events are not as common as in Europe. But they certainly exist, and they pull in hundreds of thousands into multiple experiences of highly satisfying engagements. They succeed in delivering their offerings with greater authenticity, original creativity and possibilities for self-expression. Produced with passion by people intimately connected with the content, they lend themselves to greater feelings of ownership and self-validating satisfaction. Any branding benefits are inadvertently derived from their authenticity, not the other way around.

Organisations running such events can achieve so much more with far less. And as lean entities are better primed for further evolution. So if bodies in the public sector want to encourage such events, the best support they can give is through making infrastructure available and supplying already available public services like transport and police.

But wading into content creation is a bridge too far. As many understand and acknowledge, direct public involvement in industry is deeply problematic. Don't forget Pink Bats or the $500m grant for a green car that never happened. These are lesson that government has had to relearn, and surely they apply to arts and mass events as much as they do to other activities.

So, are their specific bottom-events that can serve as models for effective public events?

Sydney Gay and Lesbian Mardi Gras offers the prime example. It definitely originated as a bottom-up event (might have been a pun once). It's an event that invites thousands of participants to unconsciously and creatively express themselves in any number of non-determined ways. Its originality and freshness pulls in hundreds of thousands of pumped followers into the city. Woe betide it fall to the imperatives of a branded city exercise; or worse, come under the sway of an arts and events bureaucracy. If it were, it could well resemble an LGBTI version of the Anzac Day Parade—forever honouring the past.

HeadOn Photo Festival is another brilliant and expertly productive example. Developed over ten years, it is now one of the world’s pre-eminent mass involvement photo exhibitions and competitions. It has valiantly seen-off many clumsy attempts at subsumption by different events and arts bureaucracies. This shouldn’t surprise anyone. The sociology of organisations tells us that that is what they do naturally.

In 2018, The Sydney Morning Herald art critic, John McDonald, lavishly praised HeadOn. When compared to the obviously moribund Sydney Biennale—caught like a yak on a stick— he sees it as a far more creatively-productive model.

Then, of course, there is the open-access Adelaide Fringe, which, over 60 years has grown from a collection of pitched tents in the Adelaide Parklands. If you can find a venue and stump up the cash; you're in. Public curators have never held less bearing. And it astounding outcomes shows just how a highly productive, and efficient cultural incubator can really work.

Fringe draws in thousands of performers and attracts the hundreds of thousands of “punters”—needed play an essential role in determining which shows will fly beyond Adelaide. Adelaide's is the second biggest, most significant Fringe in the world after Edinburgh—the world-leading market for new and emerging talent.

The success of what happens in Adelaide means that Australian performers are way over-represented at Edinburgh—by a factor of 800% when compared on a per capita basis with American acts. The likes of Tim Minchen and Hannah Gadsby broke through to international recognition through the Fringe circuit of Adelaide and Edinburgh.

So as you consider the reasons for the niggling feelings of dissatisfaction you may have when you are passively consuming the Sydney New Year's Eve Fireworks, keep in mind the sign-off the great Irish drag queen, political activist and festivals veteran, Panty Bliss, when she implores her audiences…“ to create, don’t consume..” What does she mean? 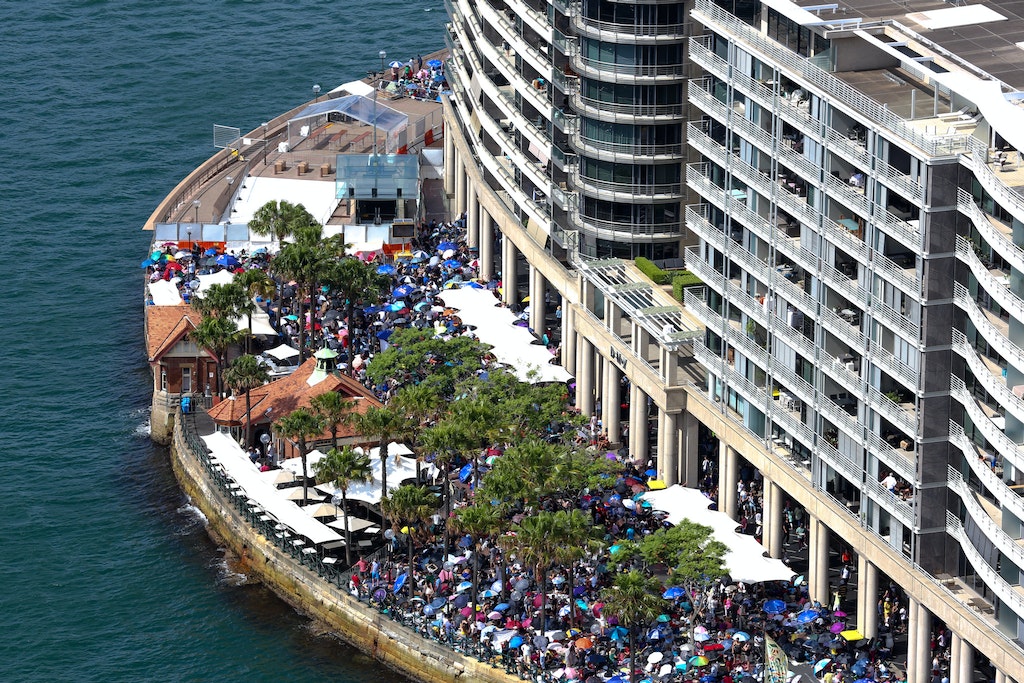 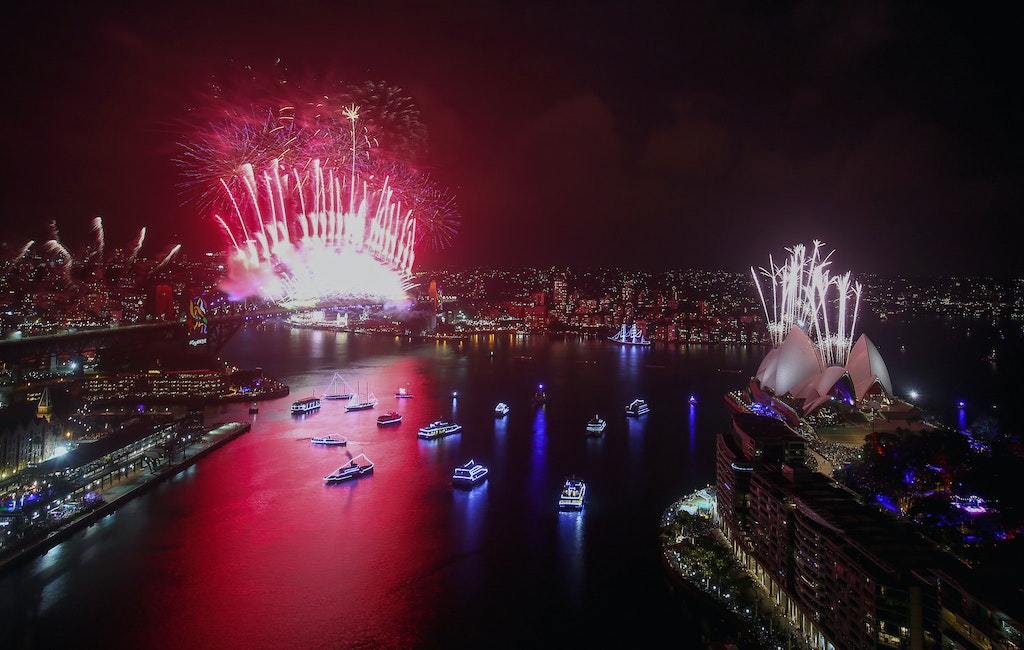 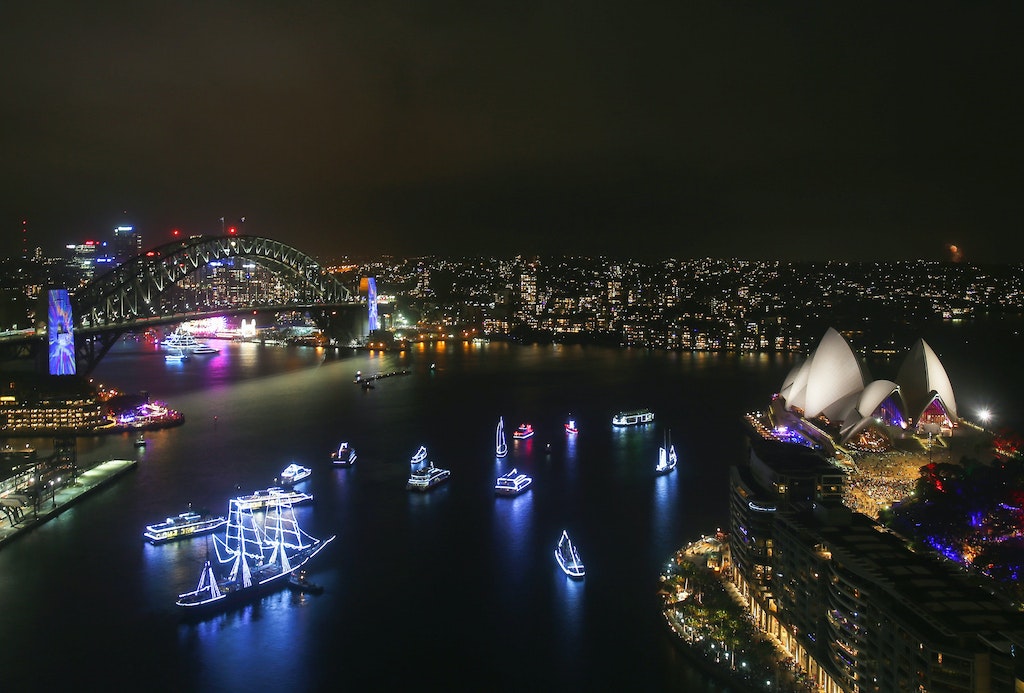 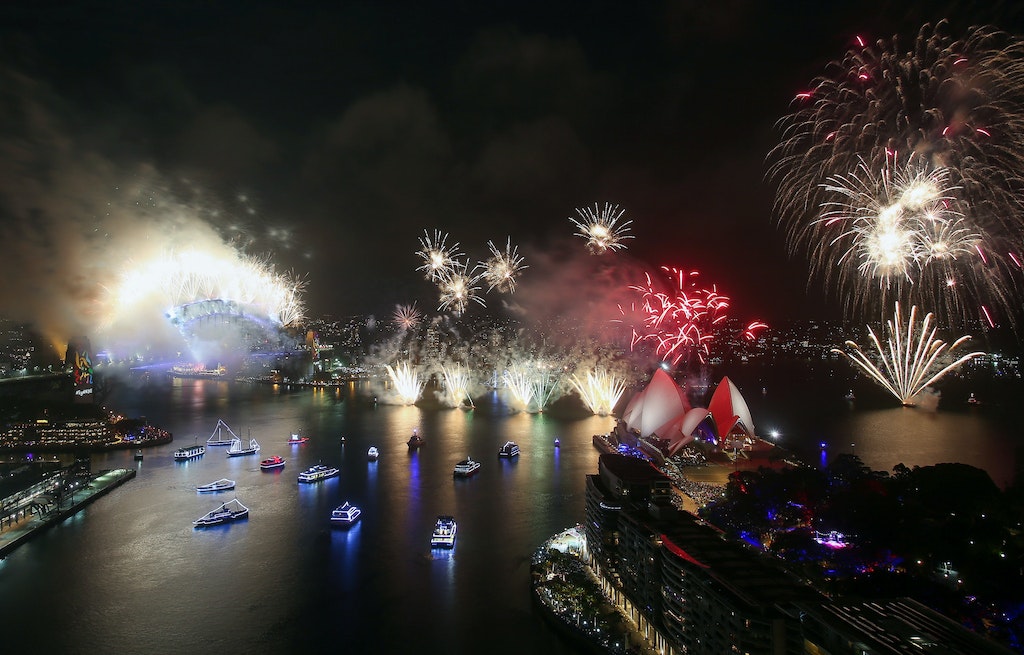 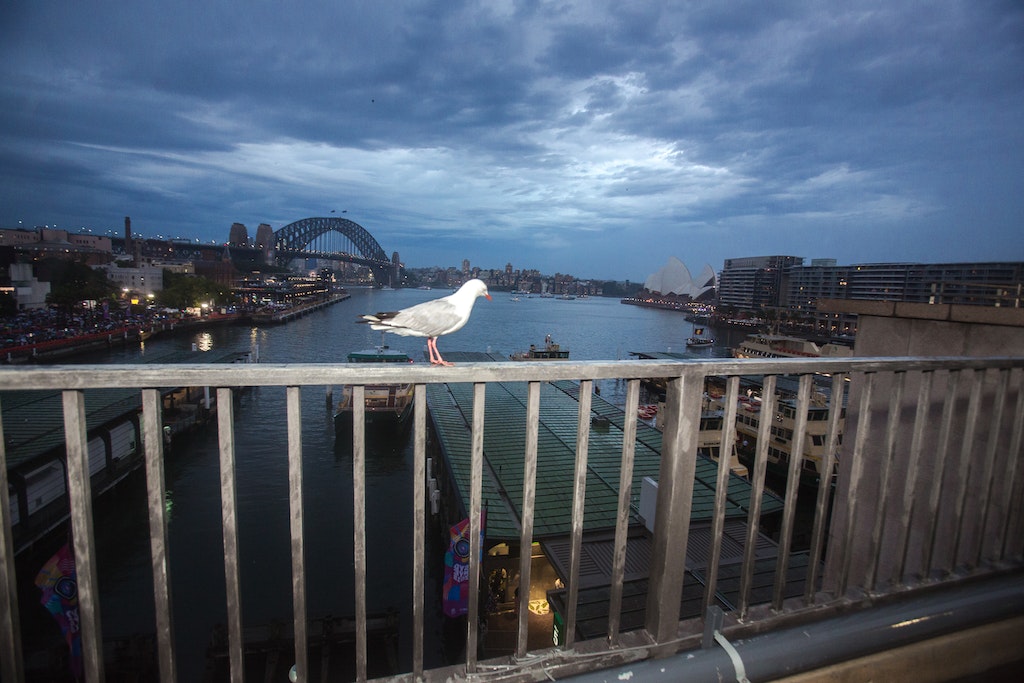