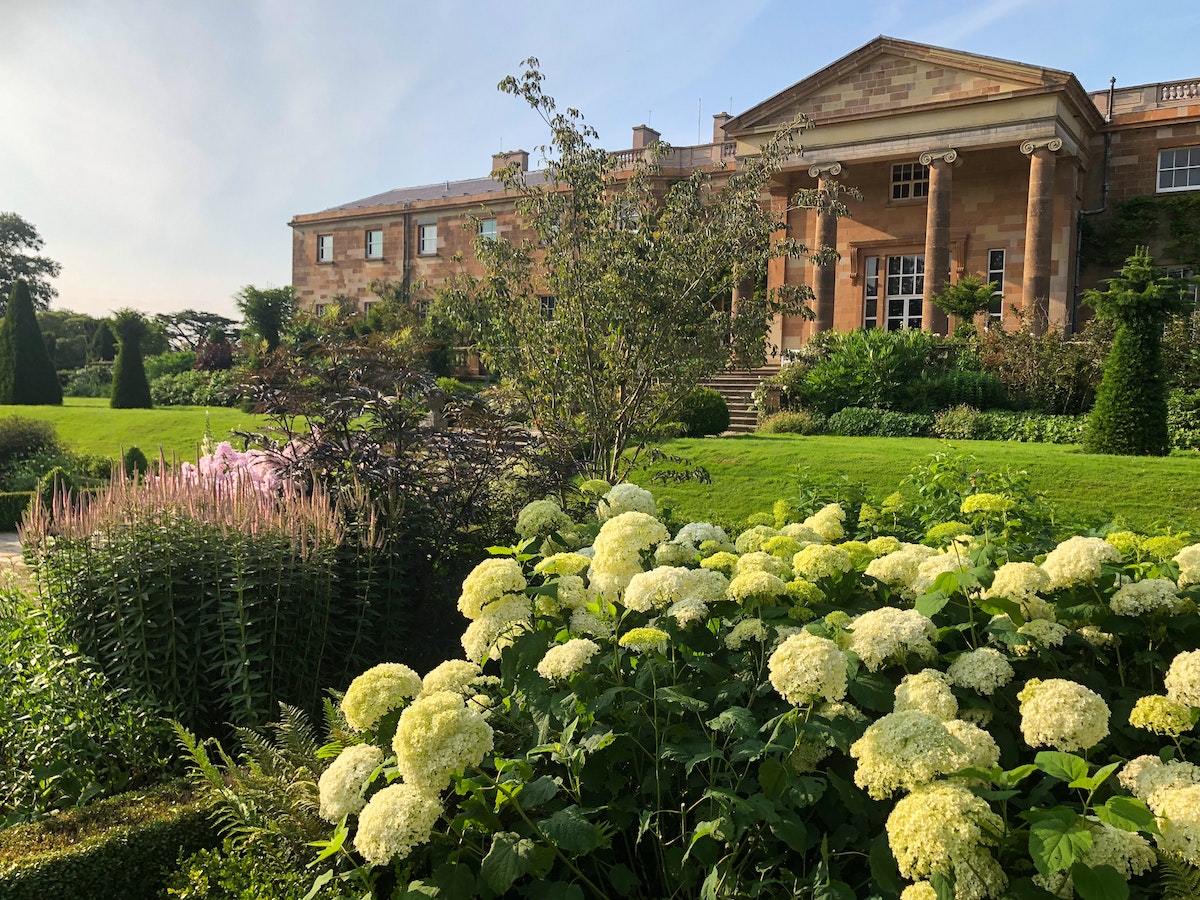 Hillsborough Castle is not a castle, but yet another grand Irish Georgian mansion from another age. But it does serve as the royal residence of Northern Ireland. It has the same role as Holyrood Castle in Edinburgh, it's just that few have heard if it. But have a look; its there on the website for Royal Palaces (https://www.hrp.org.uk). And is just one of six open to the public in the UK.

Hillsborough Castle, set at the high point of a quaint period town, is a quick 25 km motorway dash, south of Belfast. On a summer's evening, in this land where flags can say it all, a Lebanese flag is incongruously flying from one of the houses opposite the castle!

It may not be so well known, because, it was the last royal palace out of the blocks. It was acquired in 1922 by the British government to accommodate the Governor-General of the newly formed statelet—not quite the home counties; not quite a Dominion. The site has since had to shape-shift to mould itself around the various constructs imposed across this region over the last 100 years, and it's unlikely to be in its final form.
Ironing out contested histories
When direct rule from Westminster was introduced in the early years of the Trouble, the role of Governor was abolished. The Castle then became the sometimes home of the Secretary of State for Northern Ireland. As an obvious target, it was never open to the public. But it did provide a secure site for some significant talks; esp. during Mo Mowlam's time as Secretary of State for Northern Ireland, which led to the singing of the Good Friday Peace Agreement.
It was the site of the signing, in the throne room, of the preceding Anglo-Irish Agreement in 1985. The use of the site outraged some Loyalist. But diehards on both sides here, are ever eager to seize on any piece of nursed indignation to keep their arguments alive.
The site has recently been upgraded and is a now a wonderfully rich and historically endowed site. William III stayed in the town in his way to the Boyne. The permanent staff are obviously proud of what they have achieved in bringing the site into the public domain and are very keen to share and talk about the place. Interestingly, they have all just been down to the Battle of the Boyne site in the Republic to study a significant site where historic fact prevails over competing claims and interpretations.
This is the very opposite of Stormont— a neo Regency pile built in the 1930s as an expression of proud triumphalism, at home in an earlier period of Southern Africa…(topped off with a statue of a cranky Carson shaking his fist in the direction of Dublin).
That approach, sadly common in Northern Ireland, makes Hillsborough a refreshing and intelligent site.
The garden: a work of contemplative art
The pure simple logic and precision of a grand Georgian building provide the backdrop for one of the great British arts… the garden. I will defend the statement that the British have a poor tradition in drawing. And Stubbs ain't art..ever… But the living and breathing garden must be one of the highest forms of art and design practised in Britain.
It's a changing and impermanent piece of creative expression through nature. It speaks again to the hidden Zen qualities of the British nation… also seen in the frankly bizarre, even eccentric, appeal of cricket... Only the British could see a wicket turn…I'm yet to notice any movement.
The garden design is massively and deliberately, “under-designed”... There is none of the monumentality and imposing majesty of the baroque or the fussiness of the Rococo. These are more at home on the continent. Rather, it is an imprecise and irregular homage to the passage of nature and the human experience of it. And if on a long summer's evening, you're the only person present; it will feel sublime.
Feeling of a personal home
Inside the palace itself, expresses the comfort of a real home… albeit scaled up to Downton Abbey standards..… But the personal sitting rooms are open to wander through (it is closed several times a year if a royal personage is visiting). Look who pictures are on the table!! Also, I thought the books were a little banal… but no worry. It's not as intimate a view as at Castlegondolfo near Rome, where you can literally open the underpants draw of the previous Pope.. but it's as intimate as British sensibilities will allow.
But in truth, the house “belongs” to the permeant staff.. who are only to willing to share and discuss their home with visitors.. and like Castelgondolfo..its availability and openness is yet to fully register on the public consciousness.