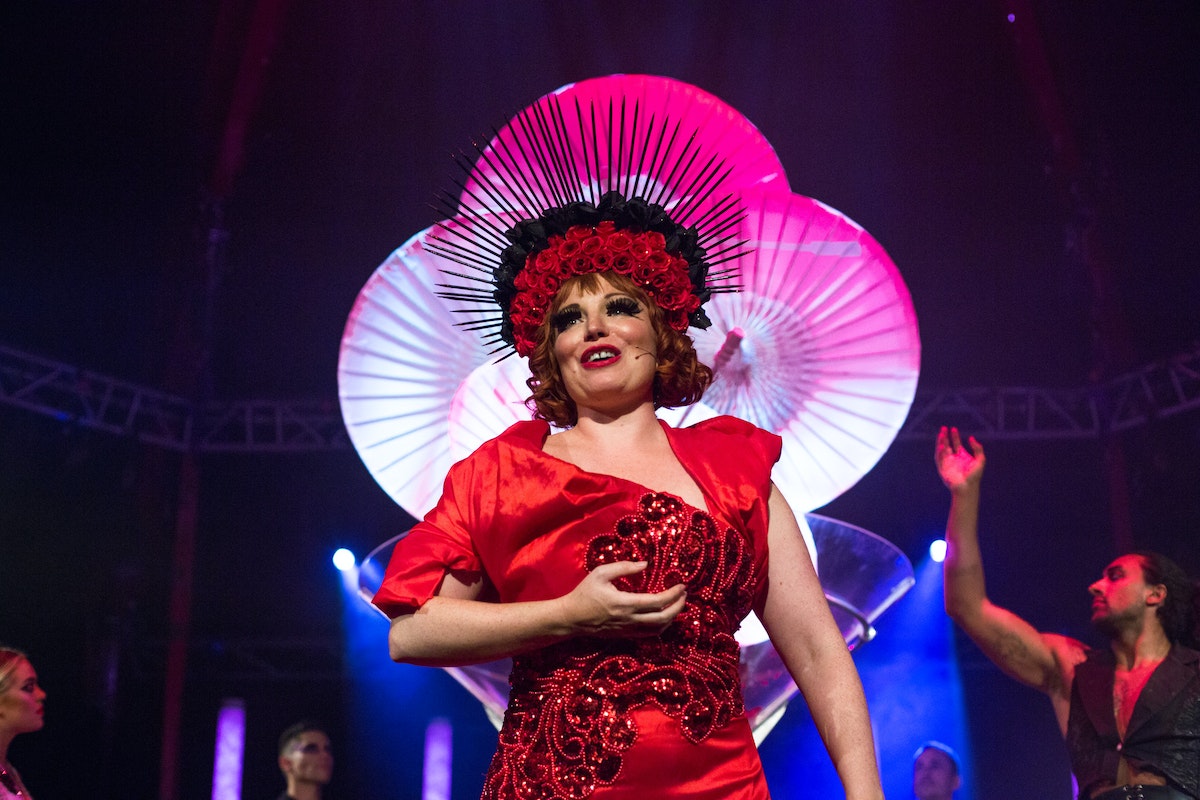 Rouge invites you into an adult fantasy that is palpably-sumptuous and aesthetically-pleasing.

It exudes a liberating sense of truely shameless sexuality, that opens up to all sorts of lush imaginings. Yet Rouge is forever friendly. It’s happily playful; and quick to goof-off and self-mock. That sexuality was always this safe.

From backstage, Rouge pulls-forward the radical inclusivity that has always been the mark of the travelling circus. In Rouge, it’s out now, and centre stage. Rouge is so gorgeously subversive, in so many ways, it doesn’t need to labour its inherent radicality.

The show's sexual context draws us into what is possible and what can be safely imagined. Its relational possibilities are entirely contemporary. Certainly, as director Elana Kirschbaum promises, there are no, “pretty cookie-cutter woman on stage, with a blank expression... an empty smile... standing in the corner in a skimpy outfit. Call that sexy? No, sexy is an opera singer...” You’ll have to see the show to see what she means.

When Rouge engages the lingering assumptions and presumptions of heteronormality, it's as an easy send-up, targeted to subvert its overhanging impacts. With a wicked sense ofcampy humour, Rouge pricks the pretensions of such projected identities.

Rouge is Adult Circus, as it has now evolved in Australia.

For five years, In a previous life, Kirschbaum as producer, toured an adults-only circus-cabaret show around Australia. She describes its components. “We had live music, we had a singer and a circus... [which included] all sorts of ‘body-adult’ stuff.” In creating Rouge, Kirschbaum already knew her demographic; it was the one she had come to know so well on tour.

Over the years, it may not have been that obvious from front-of-stage, but the circus world has a long tradition for radical inclusion. It’s a tradition that predates any modern sexual revolution, and is apparent in the touring troupes of Shakespeare’s day.

For generations, the long, the short, the tall, the dwarf, the coloured, the queer, the misunderstood and the merely adventurous, have all variously ran away to join the circus. As Kirschbaum notes, “When carnivals were touring... [they were] uniquely tolerant spaces... It’s why you see, a way higher percentage of queer artists in the circus community”.

In Rouge the radical inclusion of the circus world now takes centre stage. It's out now...

In recent years, Kirschbaum has evolved into a creative-producer. It's a role that extends to being co-director of the major Adelaide Fringe hub, Gluttony. The term Creative-producer describes a creative process that comes from the film industry. Kirschbaum explains that its where a producer makes "a series of creative decisions early in the process that [then] shapes the project.”

Rouge is the first show Kirschbaum has formally directed. For Kirschbaum, directing is a collaborative process. “It’s really a process of bringing together a group of creative people, letting them have ideas, and then shaping that. It’s more than dictating what the show was going to look like."

Rouge arose from a little bar in Melbourne of the same name. There, Kirschbaum produced a modest weekly line-up show. As it established a mood and following, the bar's name came to describe both the show’s title and its emerging style. The concept eventually outgrew its origins. And with a bigger budget Kirschbaum devised a show that could expand with a connecting arc and tour beyond its confined and fixed space.

From the outset, Kirschbaum devised Rouge for a Spiegeltent (Dutch for “tent of mirrors”) environment. These were spectacular homes of transportable glamour from another era. Originating in the low counties, these bejewelled demountable palaises of canvas, cut glass, mirrors and panelled wood, emerged around the turn of the 20th century. They remained popular through to the 1930s. With booths and bars, they were containers for transient nightclubs, dance halls, cabarets and other spectaculars.

Each Spiegeltent has a name and history. The queen of the tents is The Famous Spiegeltent. Built in Belgium in 1920. Like its surviving brethren, it's not ready to be pensioned off as a museum curio. It now happily resides in working retirement in sunny Adelaide. From there, it transports its particular shipload of theatrical ghosts as grey nomads across the vastness of Australian continent. For this particular old queen, its ghost includes Marlene Dietrich who once performed in it.

So, the Spiegeltent’s fading-snapshot ritzyness, becomes the starting point for Rouge’s look, feel and sound. In designing the production, Kirschbaum says, “We wanted to take a combination of the old world opulence of a Spiegeltent.... a circus take on a 1920s jazz club... and give it kind of a modern twist”.

It's enough for Dietrich to contemplate from the wings, with one leg cocked-up provocatively on a backward-turned bentwood chair. Seen filtered through the theatrical fog, she wonders, “Has the world finally got me? Have they caught up? Maybe they have surpassed me?”